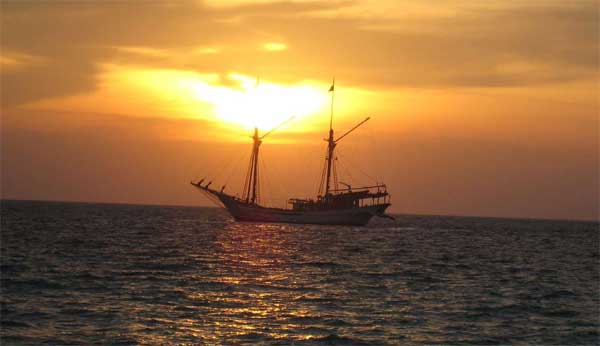 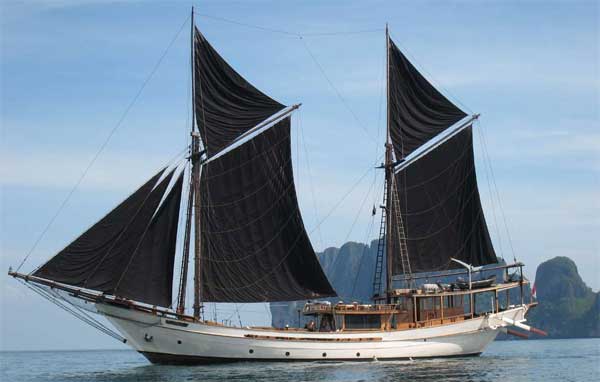 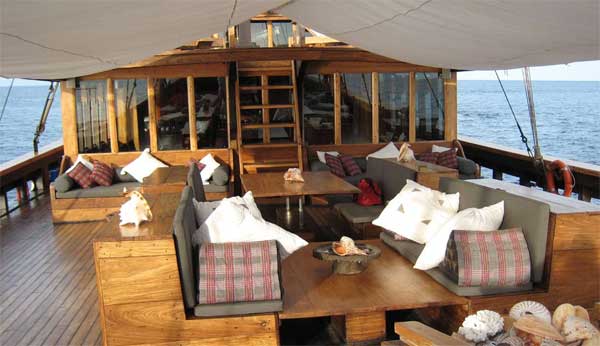 Away from the hustle and bustle of the Mediterranean, the luxury sailing yacht ‘Silolona’ sails the seas of Malaysia, Thailand and South East Asia. Karen Kelly, the owner of luxury yacht charter company “All Yachts Worldwide’ experienced a cruise on board this wonderful yacht, for what she would remember as a truly magical experience.

Arriving into Langkawi Malaysia I was met at the airport and then taken to the Four Seasons Resort, which is rated the best hotel in the world. After checking in, one of the hotel staff escorted me in a golf cart to my beach front villa. The panoramic view from my room was breathtaking. There outside my window was ‘Silolona’ at anchor.

She looked just as I had imagined, and was truly the queen of the sea. She has a powerful presence floating amongst the waves with the golden rays of the sunset painted on her profile. After visiting the spa and swimming in one of the three infinity pools I was at peace with the world just as ‘Silolona’ was at peace with the sea. The next morning luggage was picked up by the bellhop, not to be seen again until I boarded the yacht. I joined the other guests for breakfast at the beachside restaurant located at the resort.

The owner of the yacht, Patti Seery, met us just as we were finishing our coffee. She gave us a brief background on our cruising itinerary and what to expect for the next week while onboard. Little did we know that words cannot describe the experience onboard, the sound of laughter, the awakening tingle of new taste buds at each meal, or the smell of the sea air while cruising under full sail, along with the exhilarating excitement in the air of what was awaiting us yet to come.

After breakfast several crew members came to greet us and walked us down the beach to the tender. It was a short tender ride until we stepped aboard and were greeted with a refreshing purple drink. It certainly was not Welch’s grape juice and when I asked what is was the chef proudly displayed a large purple hard skinned object which was local guava fruit. Certainly not something I would find in my grocery store in America!

The 16 crew members appeared from nowhere and were introduced to us, one by one, by Patti. The chef was American and had been living in Indonesia for over 10 years while the rest of the crew were from various villages throughout Indonesia. Patti then told us the legend of ‘Silolona’ and how ‘Silolona’ received her name. It came to her from a dream she had which was to take her passengers to the far corners of South East Asian Seas in comfort for luxury private charters. This dream has now become a reality.

Long ago when the earth was still young, the gallant and fearless Atuf fell in love with the most beautiful woman in all Tanimbar. Not only Silolona’s beauty but her inner strength and skill in weaving and basketry made her the ideal wife for the strapping handsome Atuf. In the time of the ancestors the sun was too close to the earth. Life was so harsh that Silolona died in the full flower of her youth. Atuf deeply mourned her death yet vowed to make the world a safer place for all his people. Inspired by Silolona’s spirit, he conceived a bold and daring plan to build a boat capable of sailing towards the sun.

When the boat was launched, Atuf’s pure and powerful voice called forth the spirit of his beloved wife to join him on his dangerous journey. Atuf gave the name Silolona to his magnificent new boat. After a long and arduous voyage under the blazing heat of the monstrous sun, Atuf once again called fourth the spirit of Silolona. With renewed strength Atuf then hurled his magical spear shattering the sun and creating all the stars and constellations. The world became a safer place for all mankind.

‘Silolona’ is a traditional wooden sailboat, a Phinisi, built by hand in 2004 by the Sulawesi Konjo people in Indonesia. She was made entirely from wood including the nails which were hand pounded into place. The history of the Spice Route, the far distances between the Australian Aboriginals and South East Asian coast, are all related by one common thread: the Phinisis of Indonesia were the link between all. Built by the Konjo people of Sulawesi, the majestic hand made ships have been sailed by the Bugis people for generations and are still being built in the same traditional fashion now. Used as cargo ships to transport merchandise between the islands, the Phinisis were the main mode of transportation for wood, spices and rice between the Indonesian islands. ‘Silolona’ is not only a super yacht but a ship with tradition, history and soul of those years of boat building experience.

We had a special visitor onboard dressed in his native Indonesian clothing complete with a real bird of paradise in his head piece. Blowing in a large conch shell producing a horn like noise and getting everyone’s fully devoted attention, he began the chant to the Spirit of Silolona asking for her blessing for our voyage we were about to begin. Before departing he informed us that his request had been granted.

We were then shown to our cabins. Walking through the hallway below there was an immediate air of calmness. Was it the spirit of ‘Silolona’ that filled me with the peacefulness of the present where I could feel my heart pounding and hear my every breath?

My luggage was in the Java Cabin Suite, located at the bow of ‘Silolona’, which offers the charm of Java in its cool comfortable décor. With the scent of coffee wood and rich colors of Javanese batik, it is a heaven at sea. It is furnished with a queen size bed along with a couch large enough to sleep on. Each cabin has a unique theme throughout. Each room with a double bed and single bed or couch, a vanity and desk along with a full hanging closet and ample drawers. The rooms are all en-suite with a toilet, sink and shower complete with fresh hand made island soaps and shampoos, a hairdryer, and thick bath towels, changed daily. On our beds was placed the first gift of many, a hand carved statue of ‘Katuf’.

Activities varied each day and included swimming and snorkeling, water skiing, diving kayaking, beachcombing and picnics on deserted white sandy beaches. We visited many of the hongs, some with several large rooms and high ceilings. Some had large openings to the sea while others you had to lay down to enter but could sit up once inside. Some of the hongs you were able to go in one side and come out the other. These places are ideal for small boats to tie up in during a storm or for pirates to store their hidden treasures.

Each day when the crew raised the sails on ‘Silolona’ they were dressed in their native sarongs from their villages as each village had unique clothing patterns and head pieces. The crew members would sing and chant as they raised the majestic sails by pulling on the ropes.

The most memorable evening was to go ashore on one of our many private islands and have the crew set up for a beach barbeque. Straw beach mats and chairs were onshore along with a huge bonfire. Two large ‘Silolona’ flags were in place marking our new founded Island. About a half dozen crew members joined us and displayed their musical talents. One was playing the guitar, while another was using an empty water bottle as a drum. Another had a harmonica, one had a tambourine and the others clapped and sang along. We all joined in while watching the sun go down, sipping on champagne and munching on tray passed hor d’oeurves. Then the magic began as the crew began to light the many candles they had buried on the beach and placed in the rocks around us. The whole place was aglow in candle light. Our yacht was waiting for us at anchor lit up by the full moon. It was sad to head back to the boat that evening and leave our wonderfully enchanted island. We kayaked around the Island of Koh Petra which is occupied by a bird nest hunter with his mother. The bird nest hunter is guarding the nests from which is made the famous and pricey “bird nest soup” believed to give you rejuvenating nutrients. We knew we were approaching Phuket by the many sailboats in the area. We would arrive at the start of the annual ‘Kings Cup’ Regatta which takes place annually during the Kings birthday. Hundreds of sailors from around the world sail to Phuket to take part in this week long event. Everyone would stop and wave as ‘Silolona’ sailed in to the harbour. Our last day, prior to departing, all of the crew members were on deck and sang us a good bye song in their native tongue. Patti did the interpreting as tears ran down our faces to listen to their beautiful words truly expressing their love of the sea and the enjoyment they had with us while onboard. I have never sailed with a crew before who was so dedicated and proud to be a part of this legend come true. Their smiling faces and hugs will long live on in my heart forever.

‘Silolona’ is truly an experience…

‘Silolona’ cruises the waters of Malyasia, Thailand and South East Asia, and is available for charter. For a truly unique experience aboard this magical yacht, and for further information, please contact All Yachts Worldwide to arrange your dream vacation while availably lasts. Email: [email protected] or phone direct: +1 954 632 3555