Inquire About This Yacht 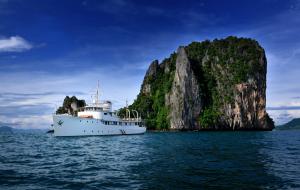 7 cabins, sleeps 10 to 12 guests
-Master Stateroom ensuite large shower, in rich mahogany has a private head entrance and a full-sized berth with king-size bed 165 x 203 cm. The timeless decor speaks of grace and sophistication.
-2 double staterooms (165x200cm and 165x190cm) with ensuite bathrooms.
-2 twin cabins (83x195cm and 83x202cm) with ensuite bathrooms.
-2 single cabins one with own ensuite bathroom (and one with a day head (sited aft deck, 83x195cm).
All cabins are fitted with top of the range 100% Egyptian cotton bed linens and all showers/bathrooms are accessorized with Molton Brown toiletries.

Built in 1944 for the US Navy Calisto was originally an IMS 1 class minesweeper who was transferred upon is completion to serve the Royal Navy of Great Britain. After World War II and the decade of glorious service her voyage soon began to take on a new course.
In 1954, she was bought over Mr. Thomas Loel Guinness the Irish tycoon and former MP, who was owned the famed La Calipso Jacques Cousteau. Under Mr. Guinness the decade of involvement the designer layout, Calisto was brilliantly transformed into this personal luxury yacht. Just like La Calipso her sister vessel, Calisto was and still is about old world charm and height sea exploration. She catered to the boating pleasure and well-heeled. She sailed the waters of Greece and Britain, roamed the seas of Antibes and Sicily and all over Europe in style. Often in the company of celebrities and politicians. Several years after, the sought-after was purchased by a prestigious French family who then kept and maintained the vessel for the next 40 over years.

Please Note: Yachts may not be available for charter or sale while the yacht is in U.S. waters. Yacht Charter Rates are subject to change. All particulars are believed correct but cannot be guaranteed.